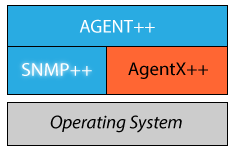 These extension have been implemented transparently for the API user, except for the Pdu and Snmp classes which had been modified in order to support SNMPv3. Additionally, the API had been extended by a new Target subclass named UTarget (USM based Target).